I recommend the plus version of the video editing program, because the price-performance ratio is simply the best and it includes proxy editing as well as (now new) 360° video editing. For me proxy editing is very important, because my computer is not as fast as it was one day. 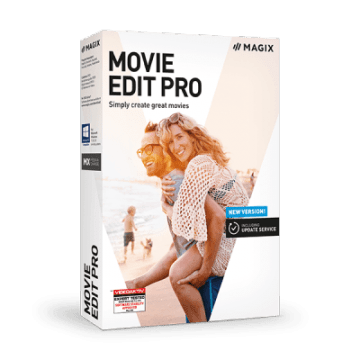 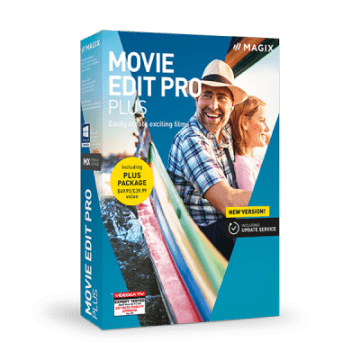 Another year has passed since Movie Edit 2018 and Magix releases the next version of the popular video editing software series. 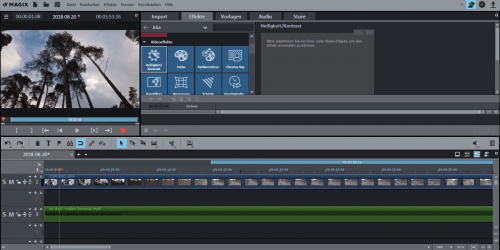 At first glance, the interface of Movie Edit Pro doesn’t differ much from that of previous versions. On the left side you find the preview monitor, on the right side the window for selecting effects, video files, audios, etc… A new button has been added here, the store, where you can buy music and video effects directly in the software. This function already existed earlier, but it was integrated into the other menus. I like the current solution much better because it’s now easier to distinguish what’s free from what’s payable.
Below is the timeline as usual, on which you can edit and move video and audio files like you want. You have the possibility to choose between the timeline mode, which I always use, and the familiar storyboard mode, as well as a simple overview of the used files.The user interface is very clear and as a beginner you will find your way around relatively quickly. I myself started editing videos with Movie Edit Pro and since then the interface hasn’t changed much.But now to the more exciting part:

Advantages and new functions of the program

All three contain a variety of effects and templates. With the normal version approx. 900, with the Premium version 1500. An important innovation are the automatic assistants, which edit your videos completely by themselves. Simply select videos, pictures and songs and the video editing program turns them into a finished film using a template. If you prefer to edit yourself, you of course can do that as well.

A highlight of the plus version is the proxyschnitt, which even 4K files can be edited smoothly with. There is also an image stabilization, automatic look adjustment and – brand new – 360° video editing.

The premium version includes all the features of Movie Edit Pro plus some effects packages such as the well-known travel route animation. Here you select a take-off and landing point and let an animated airplane fly around the world. . . excellent for travel videos.

Movie Edit Pro is a great video editing software for beginners as well as advanced users. However, the program isn’t very cheap. If you are looking for a beginner program which only includes the standard functions, I would rather recommend the Movavi Video Editor. But if you want to edit stunning, professional videos or if you work with 4K or 360° files, the Plus or Premium version of Movie Edit Pro will be a good choice for you.

This site will be available in english soon

We do our best to translate the whole site as fast as possible.

Thank you for your understanding

This website is designed to help you finding the best video editing program, because there are an incredible number of good programs on the market.

The site is mainly aimed at beginners and advanced users, as I don’t call myself a professional yet. For me, the software for hobby filmmakers is perfectly sufficient. But I also present some expensive video editing programs for professionals.

I am David and I started editing videos 1. 5 years ago. Mostly I make videos of journeys or holidays. It’s just incredibly fun to relive the beautiful moments you’ve captured while editing the video.

You also want to create beautiful memories? I’m sure you’ll find a suitable video editing program on my site.

If you have any questions, comments or simply need a recommendation, please feel free to write a comment or an e-mail. I’ll answer you within 24 hours.

No problem. Video editing programs have no delivery times 😀 . Most manufacturers also offer free trial versions of their programs. These usually last 30 days. If you are unsure which software is right for you, you can simply test it. I did it the same way.

That’s fine, but the manufacturers often offer discount promotions that Amazon doesn’t notice. Furthermore you almost always get additional plugins, which are not included in the normal package, when buying in the online shop of the manufacturer. It’s just a tip. It is of course up to you where you want to buy the software.

That is also possible. I would like to see someone who can wrap a computer program in wrapping paper, but usually there is also the possibility to get a video editing software as a DVD in a box delivered.

The nice thing about software is that from now on you can install it on your computer and test it – for free. Almost all manufacturers offer a free trial version of their products. This means that you can download the full video editing program (sometimes there are restrictions regarding the length of the videos) and test it over several days. If the program has convinced you, you can buy it afterwards. Then you get a licence code, which you just have to insert and you have unlocked the product. It is not even necessary to reinstall it.